At the sink behind the cinema’s bar there lives a nest of fruit flies. From time to time the manager remembers the buggers, and believing that they need more than a ZAP with the shocker or the spray, he goes in with his fists, grabbing handfuls of eggy goo. Just like the forgotten, rotten, fly infested half peeled orange behind the bar, the cinema plays host to a swarm of the gentrified unemployed. They’ve been nesting there, lost and lonely, day and night, brooding and breeding tragedy. The staff can’t zap them, or grab their slime with a fist, and they don’t feel too sorry for these dwellers, so they often forget that they’re there. Even a blast of Bowie at the end of the night doesn’t blow them out the door. So the staff turn off the lights and skip to the roof for a cig. But they’re still there, hiding at the back, noticing that yesterday’s newspapers haven’t been thrown away yet, straightening the menus and pretending that they’re part of the team. The manager checks the closedown: ‘ hey, you can’t just turn off the lights and leave. You may not think those guys count, but they do!’

The cinema is a great shelter for those trying to avoid their desert scape home lives. An escape! The flow and swell of all the customers, the dates, families and friends whose chatter and good mood wash around the bar, swilling out the residue of the dweller’s sadness. NOISE is fantastically distracting. From their sense of familiarity with the cinema grows a feeling of family. This ‘Family’ -> sprung from familiarity like the offshoot of a twisted nettle. The same background CD playing out in the bar has a beat – that beat, the one that they can hold on to. The journey of the cutlery from one mouth to the dishwasher, staff’s tea-towel, another mouth and back again. Until eventually the cycle will bring the same knife and fork back to their plates. It’s a chain of contact, retracted and returned from a smile, to a yawn, chipped front tooth, saliva, fairy liquid, and right back around to the banal beginning.

For the dwellers, a trip to the cinema is the day to day; not a treat, a break, an escape, but a routine. They don’t love film, some dwellers don’t even watch them, but they love being at the cinema. If they’re not there for the silent 2ish hours of escape in the dark, I think it’s the company that they come for. Company/ companionship in the loosest sense- it just being around other bodies, rubbing up next to another’s good mood. So many opportunities for interrupting – the people in the line, couple at the kiosk, students on their laptops, and the other lonely dwellers all milling around. Same clothes, same drink order, same seat, same sadness. Day by day distractions from their discontent. They Like the familiarity of the place and the fact that the people who work there don’t just tell them to ‘fuck off’. But the staff are full of bitchy thoughts. They crouch down behind the bar, squatting on a blue roll and secretly take the piss. The squirts of steam from the coffee machine whip up a cloud of noise, diluting the sound of sniggering. 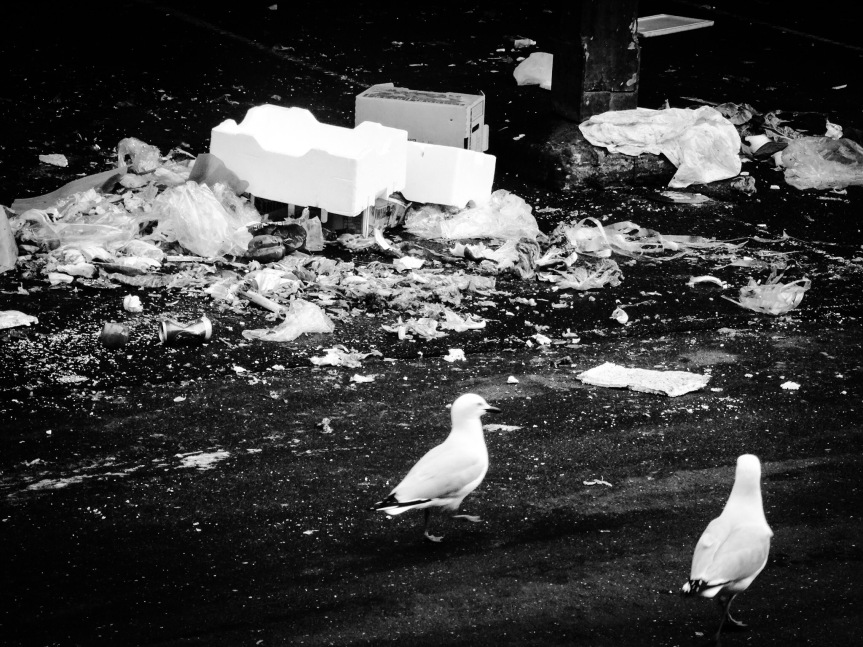